So in light of vitamin D being in the spotlight quite a bit recently as a suggested supportive therapy for the immune system towards COVID-19 (even though there’s years of peer reviewed literature on the vital role D plays in human health – especially in the role it plays in immune health) I wanted to write a piece on vitamin D before people start blindly loading up on vitamin D supplementation, as there’s many things to consider before you think about doing it.

A prolific international increase in vitamin D deficiency has been identified in recent times, contributed by a lack of environmental exposure, health issues, or errors in metabolism such as hydroxylation in the liver and/or kidneys, both of which has been linked to increased risk for autoimmune disease – something I deal with a lot in clinical practice. This micronutrient/cecosteroid deficiency exemplifies how a specific deficiency can modify phenotypical risk for autoimmune disease by altering production of immune modulating T-reg cells.

Vitamin D is fat soluble compound that can be converted by the body to its active, hormone like nutrient 1,25 dihydroxy vitamin D and is primarily obtained through the consumption of fish, fish liver oils, and fortified foods as well as through sunlight exposure or dietary supplementation. It acts primarily via regulation of gene expression facilitated action of the vitamin D receptor (VDR).

Although often referred to as a “vitamin”, vitamin D is not technically a ‘vitamin’, neither is it strictly an “essential” vitamin, since humans are capable of producing the active nutrient when appropriate amounts of sunlight are in contact with the skin. Normal bone development and maintenance are essential functions of vitamin D3 through regulation of calcium & phosphorus homoeostasis, though nearly every tissue in the body has an important vitamin D related function.

Other than nutrient inadequacy, or drug-induced depletion, additional vulnerability can be down to limited sun exposure/heavily pigmented skin, gastric bypass surgery, inflammatory conditions such as inflammatory bowel disease (IBD) which includes ulcerative colitis and Crohn’s disease, liver disease, cystic fibrosis, obesity, kidney disease, and victims of severe burns to name Synthesis vitamin D is severely limited when only arms and legs are exposed to sunlight, and is further hindered by darker skin and northern latitudes. 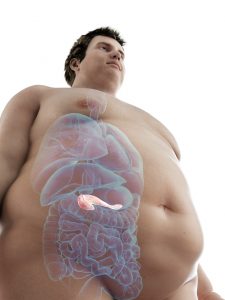 With the growing obesity epidemic affecting many countries, especially the United States, more individuals are seeking surgery such as gastric bypass. Digestive anatomy alterations from the surgery is can cause nutrients bypass important sites of digestion and absorption including the stomach, duodenum and/or approximal jejunum, threatening proper absorption and utilisation of nutrients. Patients who have had gastric bypass, should undergo recurrent screening and evaluation of vitamin D status as well as other common nutrient deficiencies before and especially after weight loss surgery. The recommended dosage of vitamin D in post weight loss surgery patients is 3000 IU/day (75 µg/day) until serum 25(OH)D levels are sufficient, although personalised recommendations or suggestions should be considered on a case-by-case basis.

There is a clear inverse relationship between BMI (or adiposity) and serum 25(OH)D levels. There are several proposed mechanisms that aid in explaining this relationship between serum 25(OH)D and BMI, but the two most supported are the sequestrating theory and volumetric delusion affect. Vitamin D is thought to sequestrate in adipose tissue, inherently increasing the physiological demands of this fat soluble vitamin as fat mass increases. The volumetric delusion effect suggests that high amount of vitamin D is needed as vitamin D is diluted over a larger volume. Additional theories include limited Sun exposure due to greater covering of skin and increased one, 25(OH)D concentrations, while decrease 25(OH)D concentrations; however, evidence to substantiate these theories is limited. High supplemental doses are typically needed in obese individuals to allow them to reach adequate serum 25(OH)D levels. A third factor that I’d like to add is that individuals who are overweight may be body conscious, therefore tend to keep themselves covered up a more than others. Being that torso exposure to sunlight is the most optimal way for endogenous skin production of vitamin D, individuals who keep their torso covered up greatly reduce vitamin D synthesis.

As a side note – Individuals whose occupations require them to work from enclosed spaces such as homes & offices that affects the level of light exposure which therefore limits the amount of sun-derived vitamin D available can increase the risk of vitamin D insufficiency and deficiency. Additionally individuals who use sunscreen when in the sun may also compromise their availability for vitamin D conversion. 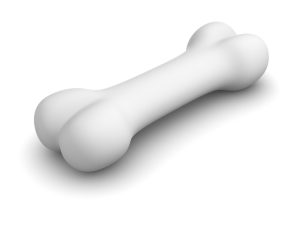 Individuals with liver disease, gallbladder issues/gallbladder removal, digestive disorders, certain nutrient deficiencies, and GI infections such as H.Pylori & SIBO are at an increased risk of developing vitamin D deficiency due, in part, to the reduction in the intestinal availability of bile salts which I needed for proper vitamin D absorption. The kidneys also play a vital role in vitamin D metabolism by converting 25(OH) D to its active form. Several studies have demonstrated in adequate vitamin D levels in all stages of chronic kidney disease (CKD).

Studies show that breastfed infants may have an increased risk for developing vitamin D deficiency because the vitamin D content of human breast milk has been reported to be low, with some studies reporting concentrations as low as 0.10 µg/day (4 IU/day). In addition, older adults such as the elderly population, vulnerable to vitamin D deficiency because they have lower dietary intake of vitamin D and spend more time indoors; additionally, as skin ages it becomes less efficient at synthesising vitamin di from sunlight exposure and the liver becomes less efficient at producing 1,25(OH)2D.

The lab tests I often use to comprehensively assess/determine vitamin D status in patients are:

Vitamin D is especially important at regulating the expression of antimicrobial peptides (key mucous membrane defence chemicals), especially cathelicidin, which defend all mucus tissues against pathogen adhesion and survival in the gastrointestinal tract. Commensal bacteria and pathogens can stimulate production of the hydroxylase enzyme that converts vitamin D into its active form 1,25 (OH)2D. Once in the presence of active vitamin D, local macrophages will limit production of the pro inflammatory cytokines TNF alpha, gamma interferon, interleukin-12, whilst down regulating several PAMP receptors, helping to maintain tolerance.

Vitamin D is necessary for the local production of antibiotics and mucosal defence, and it helps to control inflammatory cytokines production in the innate immune system.

Vitamin D deficiency has many implications in the level of risk an individual may have in terms of autoimmune and CNS problems, as the principal in the immune tissues rely on it to maintain tolerance; plus it is involved in over 2000 genes, or about 10% of our entire genome.

I’ve also found empirically that vitamin D can be useful in the management of patients endometriosis, which usually involves a defective immune system (as well as other autoimmune cases) resulting in the inability to recognise & eliminate endometrial tissue. 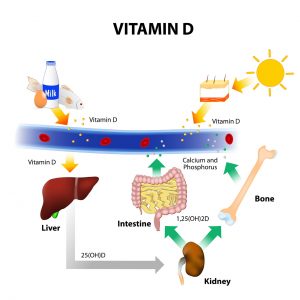 Initial symptoms of vitamin D deficiency may include muscle weakness and bone pain although these symptoms are likely to be very subtle, and often go undetected. That being said, just because vitamin D is the hot topic at the moment, don’t instantly assume that you are deficient and blindly supplement it in large doses on a daily basis for long periods of time. The reason for this is that because vitamin D is classed as a ‘fat-soluble vitamin’ which can be stored in fatty tissues of the body – toxicity can occur when supplementing in high doses and/or for long periods of time. Hypervitaminosis D is rare but technically possible with long-term, very high daily vitamin D supplementation. For instance, while 50,000 IU (1250 µg) has been documented as a safe once week-weekly supplement, This amount has not been documented to be safe when use daily for long periods. The tolerable upper intake level set by the IOM is 4000 IU (100 µg), a number that i believe is too conservative and based on poor science. Serum 25(OH)D levels above 100 my/mL (250 nmol/mL) should be considered a sign of oversupplementation vitamin D3. Below are the ‘functional’ reference ranges that I use in functional medicine practice.

In cases of severe vitamin D deficiency, some studies have suggested loading doses of 50,000 IU (1,250 µg) once weekly for two or three months or three times weekly for a month, with added doses of 800 to 2000 IUs (20 to 50 µg) per day regardless of dosing pattern, to prevent recurrent deficiency, however, a strategy like this should only be carried out working under the care a qualified health professional.

It wouldn’t be right to conclude talking about vitamin D3 without talking about vitamin K. Vitamin K has also been increasingly linked to bone health in recent years and has spurred a new interest among clinicians in the supplementation of vitamin K together with vitamin D and calcium (as well as other nutrients) in many bone health support protocols. Low vitamin K intake and low plasma levels of the vitamin have repeatedly been associated with low bone mineral density as well as increased osteoporosis and fractures in postmenopausal women.

Vitamin D and K work synergistically to support bone health. One study suggests high doses of vitamin D may increase the demand for vitamin K. This model implies the administration of doses of vitamin D beyond the upper limit could cause a functional deficiency of vitamin K, based upon the role of vitamin D in regulating expression of Gla proteins, while osteocalcin activation depends on vitamin K-mediated carboxylation.

In summary, there’s no doubt that adequate vitamin D status is a highly important part of human health. This doesn’t necessarily mean that supplementing with D right off the bat is the answer for everyone to address an issue of low D as it may be down to an error in metabolism, or other underlying factors that may need addressing, or at least taking into account. If you are concerned about your own levels of vitamin D, and investigating why it may be low or effected, I always recommend a comprehensive functional assessment is carried under the care of an FM clinician, which may include the assessment of D status alongside other biomarkers in order to make a more rounded & meaningful clinical picture.

If you are looking for someone experienced to help you uncover the underlying functional/biochemical/metabolic dysfunctions that may be contributing to your lack of functional wellness then feel free to book a complimentary 30 minute pre-consult to see if we are the right fit to work together.

Thank you for you attention.