A word I’ve written about before in several different contexts, that we all hear getting thrown around daily, without people really understanding the true meaning of the word and how it effects our body chemistry is the word “stress.”

But what does this term really mean, and how does stress relate to our body chemistry, which can lead to such a wide variety of metabolic dysfunctions & diseases?

Well today I want to focus on a specific area of stress which doesn’t get talked about as much, as it tends to go unseen & unheard, but is probably one of THE most important forms stress we should be concerned about… 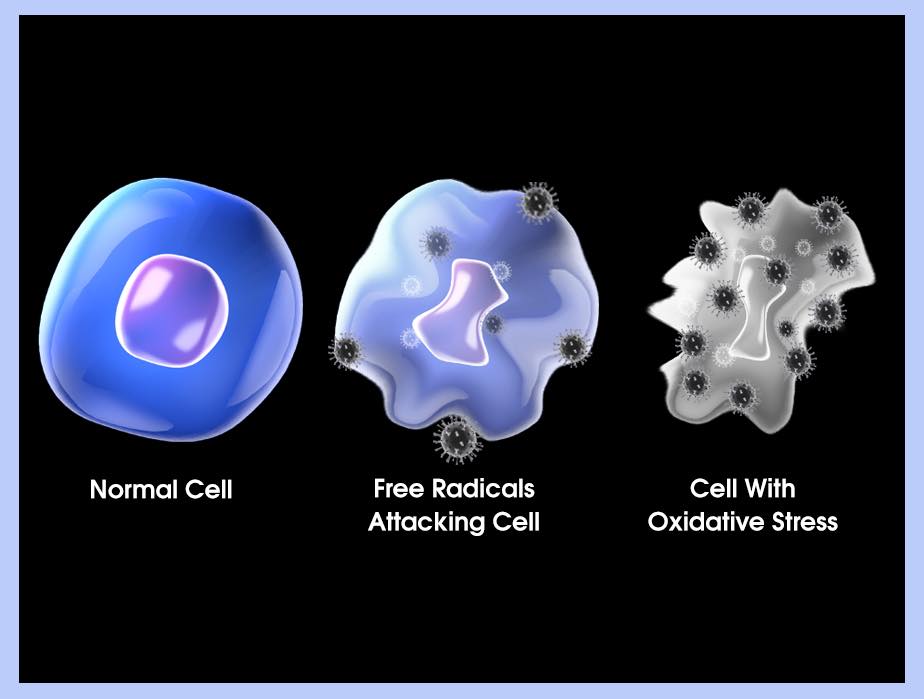 Stress that happens IN the Mitochondria.

Understanding free radicals requires a basic understanding of chemistry so I’ll break down for you in Layman’s terms.

Over the years it’s apparent that ageing & disease is highly associated with the efficacy of the mitochondria. You hear me talking about this topic a lot as it plays a big part in the work that I do.

Free radicals are a byproduct of energy consumption in our mitochondria; the tiny cellular factories that produce energy in our body. It is during this process however that these “free radicals” that are produced in the mitochondria, damage the substances that the cell needs to work properly, and can cause cellular mutations that can lead to serious metabolic diseases such as cancer.

I’ve written about this in more detail in my recent article “Meet the Mighty Mitochondria” which if any of you missed it you can read about here.

Think of free radicals like the fumes that come out the back of you car exhaust or tail pipe, after the fuel is burned in the engine. These fumes or free radicals being highly poisonous waste products.

I’m sure some of you have heard tragic stories of people taking their own lives by way of asphyxiation; due to carbon monoxide poisoning; by breathing in their own car fumes in their garages. It’s no different how these free radicals poison our cells, resulting in the same fate… cellular death.

Would you believe it if I told you that oxygen; the gas of life; is both a blessing and a curse.

Without going too off topic we can compare this phenomenon with 2 other examples in HTMA & Functional Medicine.

Let’s take copper as an example…

This can also be a blessing & a curse. We need it for many important enzymatic functions within the body; one of the main ones being oxidative respiration in the last step of electron transport where it injects oxygen into the cell for the combustion of the fuel into ATP. When copper is deficient or metabolically inactive it can cause metabolic chaos by causing an anaerobic environment within a the cells.

No oxygen = no life… “Beneficial life that is… Not pathogenic life…

Another example is the delicate balance of hormones & bacteria within the body. Just the right amount, and the right balance keeps our bodies healthy. Too much of one, or an imbalance of another can be detrimental to ones health causing systemic dysfunction & dysbiosis.

Anyway, back to the original topic of conversation…

As humans, we need to breathe in oxygen in order to live. Every single cell in our body requires oxygen either directly or indirectly; yet the simple act of breathing in oxygen results in the formation of highly reactive molecules called “free radicals.”

As the free radicals interact with other molecules in the body, they cause what’s referred to as “oxidative damage” that can result in the development of a wide range of illnesses and diseases. Ones lifestyle and environment also play a big part in contributing to the production of these free radicals.

Just like a sliced apple turns brown as it oxidises when it’s exposed to air; our cells can also “rust” when we breathe due to oxidative stress, a process caused by free radicals.

It’s these unstable molecules that damage or “oxidise” cells throughout the body in a process called “oxidative stress.”

Over time, oxidative stress can leave our cells and tissues unable to function properly. Free radicals can have serious consequences for our health. They damage tissue, they damage our DNA, they damage our cell membrane, and are the underpinnings of almost all of the chronic diseases we see today.

Free radicals are unstable atoms. These atoms are surrounded by electrons that orbit the atom in layers called shells. Each shell needs to be filled by a set number of electrons. When a shell is full; electrons begin filling the next shell. If an atom has an outer shell that is not full, it may bond with another atom, using the electrons to complete its outer shell. These types of atoms are known as free radicals.

Atoms with a full outer shell are stable, but free radicals are unstable and in an effort to make up the number of electrons in their outer shell, they react quickly with other substances.

When oxygen molecules split into single atoms that have unpaired electrons, they become unstable free radicals that seek other atoms or molecules to bond to. If this continues to happen, it begins a process called oxidative stress.

Oxidative stress occurs when the production of reactive oxygen is greater than the body’s ability to detoxify the reactive intermediates. This imbalance ends up damaging cells in the body such as proteins, molecules, and genes which leads to a range of diseases and symptoms characterised by a progressive decline in cellular function. This is down
to the progressive accumulation of dysfunctional mitochondria and oxidative damage as we age.

Free radicals occur naturally within the body, and for the most part, the body’s natural antioxidants can manage their detoxification by donating an electron in the place of the missing electron.

But, there are also certain external factors that can trigger the production of these damaging free radicals.

The body naturally produces antioxidants like Superoxide Dismutase or SOD, Catalase, and an assortment of Peroxidase Enzymes, as a means of defending itself against free radicals. In an ideal world, these antioxidants neutralise the free radicals, thereby rendering them harmless to other cells.

Unfortunately, due to body system dysfunction, deficiencies, imbalances, & impaired organ function the antioxidants produced naturally are not enough to neutralise all of the free radicals in the body effectively. Since the body is incapable of keeping up with the detoxification demand required to clear all of these free radicals, the damage continues to spread.

These are on top of the age-related changes we see in appearance, such as loss of skin elasticity, wrinkles, greying hair, hair loss, and changes in hair texture.

I’ve listed below some of what i class as the main lifestyle factors that play a part in oxidative stress.

*Eating an excess of calories, sugars and/or refined carbohydrates. When we eat more, our mitochondria release more “exhaust fumes,” creating higher levels of free radicals as they burn fuel from food for energy.

*Exercising too much or too little. As an athlete myself as well as a practitioner; exercise is one of THE most important parts of any healthy lifestyle. But like anything; an excess can increase oxidative stress in our bodies. In general, more than 90 minutes per day is considered excessive, while less than 30 minutes five times a week in my opinion is not enough.

*Excessive alcohol consumption. Drinking alcohol increases your levels of cytokines which are inflammatory molecules that are linked to oxidative stress. Alcohol is also devoid of nutrients so therefore requires minerals to burn it which have to be robbed to carry out this process. Magnesium being a major one that’s depleted as well as zinc.

*Exposure to any form of smoking. Tobacco smoke contains more than 4,000 toxic chemicals that lead to oxidative stress. Cadmium is a big one that i see all the time on HTMA tests in people who are smokers.
Exposure to air pollutants. Allergens and industrial pollution increase oxidation in our bodies.

*Excessive stress. Stress and the stress hormone cortisol increase inflammation, which further increases free radical production. I see major dysfunction in how individuals are responding to stress on comprehensive hormone labs, alongside other functional tests I run weekly. Stuck in a state of derangement.

*Eating charred foods. These contain polycyclic aromatic hydrocarbons, which can contribute to oxidative stress. Overcooking your meat to the point of being chargrilled, damages the DNA and has been proven to be carcinogenic.

*Exposure to fungal toxins. Environmental molds from damp domestic environments, as well as internal molds and fungi residing systematically in the gut; all produce toxins that increase oxidative stress.

*Poor liver and gut detoxification. When the liver becomes overwhelmed with toxins from food, or the environment from exposure to pesticides or metals such as mercury, it becomes inflamed and produces more free radicals.

*Ionising radiation. Last but not least. I still wanted to include this as it still plays a part in today’s toxic world. Over-exposure to the sun, x-rays, hair dryers, cellphones, airplanes, electric blankets and waterbed heaters can also contribute to oxidative stress.

It’s important that we all have an awareness of the things that have a detrimental effect on the health of our mitochondrial function which can lead to excessive oxidative stress & free radical formation.

That being said; one thing I’ve learned whilst on my own healing journey; from sickness to health; is we cannot go through life existing in a bubble and expect to live a truly fulfilled life.

We need to except that we are going to be exposed to toxic material on a daily basis, whether we like it or not. And although It’s wise to mitigate some of this by taking various steps to potentially counter some of this exposure; at the same time we shouldn’t get obsessive & neurotic about every single little thing, as I find people end up fearing the world, become a fanatic and end up not “just living life”

Life’s too short to be worrying all the time.