Not taking anything away from the ‘beast of a yeast’ that is invasive Candida, and all the dysfunction that comes along with it but over the years SIBO has become a more common trend in gastrointestinal dysfunction, leading to a number of well-known, but not well understood, diagnosed, or treated health conditions such as chronic fatigue syndrome (CFS) and Fibromyalgia. These are just two of the conditions I help patients tackle working in Functional Medicine (FM). Now, when I say ‘SIBO, the new Candida’, I don’t mean in a literal sense. It just seems to be the thing that I treat & hear more about these days, where as in the past it was all about Candida. That being said, I still treat a shed-load of patients who have a yeast/fungal overgrowth. 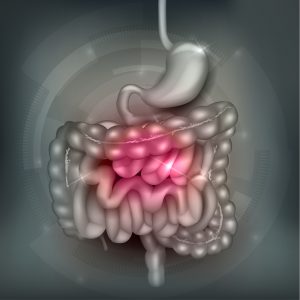 Most of individuals who come to work with me who have SIBO alongside other health issues have had it for years, and struggled to correct it as it requires skill, knowledge & experience to properly restore gastrointestinal function, as well as restoring or correcting the other body-systems that part of the overall system dysfunction. People think it’s as easy as just taking a few herbs or antibiotics and it’s gone forever. If, this was true then I wouldn’t have people knocking on my proverbial door every week wanting to work with me to help them address their health issues properly & professionally. When normal body function goes wrong, it’s never just one thing involved. The body is a biological circuit & all the tissues, organs, glands & cells are all interconnected.

Whatever the underlying causes – when the function of the body is chronically compromised from an excess of signals that are not conducive to good health; SIBO, Candida, among other pathogens & antigens can infiltrate the host immune system, proliferate, and become abundant in areas of the body they shouldn’t be, while others can become systemic, both of which are a result of, or lead to a weakening of the body systems and presents with unpleasant symptoms.

Anyone who has worked with me will be first to tell you that I always try to educate & empower my patients by making scientifically complex topics simple, and repackaging the information in an informative, easy to digest way in order to help them understand their conditions, and the reasons behind the clinical decisions to restore functional wellness, so that they can feel at ease at all times. One way I do this is by using simple, easy to understand analogies.

An analogy I often give to my patients with SIBO to help them understand their condition is by getting them to imagine a bus that comfortably, and safely seats 80 passengers. All the time the bus keeps within its capacity of 80 people or less, all the passengers are happy, and safe. The bus conductor who’s job it is to manage the passenger numbers has gone home sick so every time the bus stops at each bus stop and 2 people get off, another 5 get on. Before long the bus exceeds its 80 person capacity and those once happy passengers are now getting squashed by the excess of people & starting to become uncomfortable & unhappy. Even allowing more of the nicest, happiest people you could meet on the bus will only lead to a worsening of the situation. To restore harmony back on the bus, a number of passengers must be let off, or numbers reduced to a capacity that’s safe & comfortable.

To compare the analogy to topic of conversation – SIBO is very similar in that opportunistic bacteria (that normally get managed by the conductor of the body; in this case – the immune system, and other beneficial species of flora) get the green light to go on a intestinal road-trip north, from the colon or large intestine, all the way up into the small intestine; a location where there should only be limited amounts of certain types of bacteria such as Lactobacillus species. It’s here that they relocate. This often occurs when the body’s conductor – the immune/ecosystem system has gone home sick, or in other words is weak, compromised, imbalanced, or dysfunctional. The net result is an abundance of bacteria in the small intestine that doesn’t belong there that crowds out anything that was once good.

Because these bacteria are now in the wrong location, and in the location of the body where 80-90% of nutrient absorption occurs – ie – the small bowel; they go about their normal business feeding off, and fermenting the food we consume during its journey through the small intestine, feasting on the nutrients that don’t end up reaching the bloodstream for our bodies to utilise, and defecating their highly inflammatory toxic metabolic waste in an area is sensitive to architectural damage causing inflammation.

Over time this results in poor nutrient absorption as the villi which are the delicate finger-like projections that reside on the brush border are blunted, or atrophied, resulting in a smaller surface area to absorb nutrients from the food we consume.

The classic SIBO syndrome is characterised by megaloblastic anemia resulting from B12 deficiency, accompanied by weight loss, and diarrhoea or constipation, secondary to fat malabsorption. However, many patients present nonspecific symptoms 1 to 2 hours after a meal, including bloating, flatulence, and abdominal pain resulting from bacterial fermentation of intraluminal sugars and associated gas production.

Unabsorbed fats and bile salts are modified by bacteria in the colon to hydroxylated fats and free bile acids, respectively, which stimulate colonic secretion of water & electrolytes. Bile salts essential to fat emulsification and assimilation, must be conjugated with taurine or glycine to function properly. In SIBO, bacteria in the proximal small intestine deconjugate bile salts to form free bile acids. This can have 2 major clinical repercussions…

It’s not just the fat-soluble vitamins that can become deficient. Unabsorbed fatty acids can form insoluble soaps with calcium & magnesium, rendering them unavailable to the body. Nutrients that require an acid medium to be absorbed such as chromium, copper, iron, manganese molybdenum, selenium & zinc can also be effected.

Its common for SIBO to lead to a B12 deficiency, with megoblastic anemia, and low serum cobalamin levels. Although intrinsic factor – a glycoprotein secreted by the stomach required to absorb B12 – is not altered by anaerobic bacteria, microbes are still capable of detaching B12 from intrinsic factor thus inactivating it, as well as directly using B12 themselves to fuel their existence. Either mechanism has the the ability of making the vitamin unavailable to the body. SIBO is often accompanied by a yeast or fungal overgrowth (SIFO) as it is in most immune compromised individuals which would need a separate treatment strategy to deal with once the body was ready. The amount of people that go straight in for the kill and end up getting worse.

Below is a very recent before & after SIBO breath test I ran on one of my patients that are dated 8 months apart. This test was one a of selection of functional labs I chose to run on this individual to asses the overall function of the body. You can see that when the patient came to me the first test as I suspected revealed a text-book positive result for SIBO. 8 months later on the retest, after working closely together we have a near perfect text-book negative result & another happy patient.

SIBO can absolutely wreck people’s quality of life as I’ve seen and heard from hundreds of patients I’ve helped over the years. If you have SIBO, or think you may based on the types of symptoms I mentioned, and want to work with a Functional Medicine Professional who specialises in the digestive system, the hormonal/endocrine system, the immune system, and metabolic disorders then feel free to book a free 30 minute consultation to see if we are the right fit to work together.