Previous Next
PARATHYROID 101 “The calcium regulator”

For those of you that have read my previous articles, you will hopefully by now understand that the thyroid effects not only all the tissues and organs of the body, but also the other hormones, which, in turn; the healthy activity & function of the thyroid can also be influenced by these hormones, as everything in the body is interconnected either directly, or indirectly. For this reason it’s important to understand how they factor in to the equation, and specifically what their roles are, so in this article I want to break down, and simplify the role of the parathyroid glands in order to give you a greater understanding of their function. 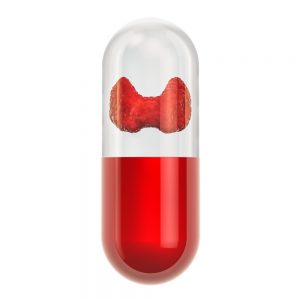 For most, the parathyroid glands are a bit of an unknown entity. Even the ones that are familiar with the name, when asked are often unclear in their minds as to what they actually do, even though logically it doesn’t take a rocket scientist to work out that the name suggests that there ought to be a connection with thyroid itself, and it’s metabolic hormones.

There are four tiny parathyroid glands which are paired up. Two just above the thyroid gland, and two just below. On rare occasion they can be out of normal position as a result of developmental abnormalities, however, under these circumstances this does not interfere with normal function. The glands are very small in size; much smaller than the thyroid gland that they reside on; literally only a few millimetres across and are a shade of mustard yellow. They were known in medical school to be associated with Moans, Groans & Stones, which I’ll elaborate on later. Their job in life (together with calcitonin in the thyroid) is to control the calcium level of the bloodstream within a quite narrow range, something like between 2.25 and 2.65 mmol/L, which converts to 9 to 10.4 mg/100ml.

Below I will list a flow chart of both the thyroid, and the parathyroid’s signalling, and metabolic steps in how they both work together, in a push-pull fashion, to regulate calcium balance – in sequence. This links into image I added further in the article in order to bring the words to life from a visual perspective. 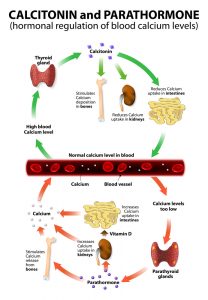 Calcium plays a crucial role in the correct function of nerve stimuli, most especially at the interface between nerve and muscle. The parathyroid glands work this control by secreting the parathyroid hormone (PTH) into the bloodstream when the blood levels of calcium are low, and calcitonin is secreted from from the thyroid when the blood levels are high. So when PTY is released, this has an effect of allowing the osteoclast cells in the bones to release some of the calcium they hold, thus increasing calcium levels in the blood. PTY also effects intestinal absorption of calcium and an increase will allow more calcium to pass from the digestive tract into the bloodstream.

Calcitonin itself is made by certain thyroid cells, the parafollicular cells, and acts to lower circulating levels of calcium (as per the flow-chart above) working against the PTY hormone. Vitamin D, metabolised to 1,25-dihydroxyvitamin D3, also has a part to play, increasing serum calcium levels.

Parathyroid activity has no link with thyroid hormone production, although it may be influenced by the thyroid stimulating hormone (TSH). A poorly functioning thyroid cannot produce calcitonin adequately, but, oddly enough this doesn’t seem to matter too much as the parathyroid glands appear to be able to undertake the regulation of calcium levels by themselves.

Mechanism can go wrong in two ways, which like most dysfunctions, is either too much, or too little of something… deficiency, or excess, hyper, or hypo…  you get the general idea.

Producing too much PTY results in hyperparathyroidism, which generally speaking is normally the result of a hormone-producing tumour called a ‘parathyroid adenoma’, which usually effects just one of the four parathyroids in about 90% of cases. Another phenomenon, although rare, is when the parathyroid glands all become enlarged, which is referred to as ‘parathyroid hyperplasia’ – although this phenomenon is not fully understood as of yet.

Should the biochemistry of the patients blood reveal excessively high calcium levels, the patient is generally referred to hospital to have a special scan undertaken – known as a Sestmbi scan. This technology relies on a protein labelled with a radioactive isotope, Technetium-99, which is taken up by the demands of the over-active PTY gland, which when scanned, shows up a hot spot. The other normal parathyroids go into a dormant state and show no activity.

Too much calcium in the blood has a number of negative effects. Not least, of course, is the loss of calcium from the chief storage site in the body – the bones – which can end up weakening them by way of osteoporosis. This is also accompanied by feeling generally unwell, and suffering with poor sleep, irritability, and sometimes memory loss (moans). Also noticed is an increased tendency to gastric ulceration, and pancreatitis (groans). And finally saving the best until last, the classic problem is the production of kidney stones which happens as a result of high levels of calcium passing through the two organs of filtration (stones). Moans, groans, stones.  Bones breaking with unusual ease – known as pathological fractures, are another indication of this type of condition. Conventional medicine treatment for hyperparathyroidism usually involves going under the knife, and removing the over-active parathyroid which although barbaric, results in a complete cure. Prevention, is always better then cure. I like to describe Functional Medicine as preventative medicine, if you catch it right.

Low calcium, as with hypoparathyroidism, tends to affect the nervous system and muscular system, and may be the result of the PTY glands being affected by an autoimmune attack, in much the same was as the thyroid and adrenal glands. In this instance, there is often general weakness, poor blood pressure control, a tendency to tingling in the hands & feet, and possibly heart irregularities. There may also be spasms or partial paralysis of the hands, which can be brought on by hyperventilation, or over breathing, when the loss of carbon dioxide (Co2) has the effect of reducing available calcium. Eventually, unconsciousness supervenes. This ‘calcium tetany’ can often be seen in the elderly, where there is an increased risk of osteoporosis. The conventional medical approach to the loss of calcium in hypoparathyroidism, that tends to offer relief is an injection of calcium salts, followed by regular calcium supplementation.

Generally speaking, the latter condition is relatively uncommon, and unlikely to a problem with thyroid disease, however, it’s always good to know what both opposite extreme ends of the spectrum look like, to fully understand & appreciate the events that occur in the in between – within the functional ranges – the ranges i’m most interested in as a Functional Medicine Practitioner.